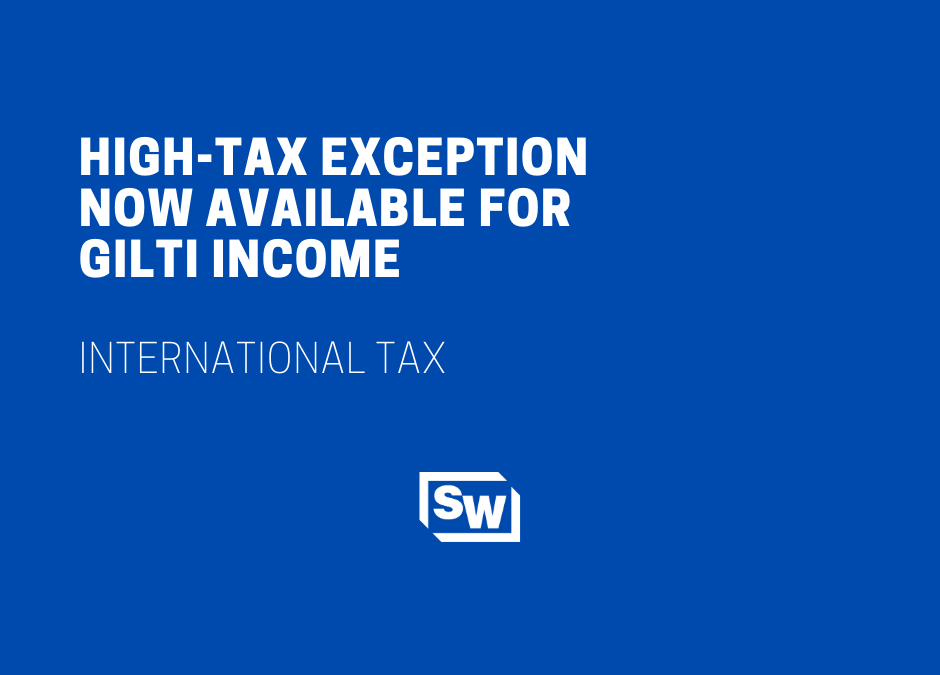 The IRS recently announced the issuance of final regulations addressing the treatment of income earned by certain foreign corporations that is subject to a high rate of foreign tax. As we have discussed in a previous blog, the Tax Cuts and Jobs Act of 2017 added a new U.S. revenue stream – global intangible low-taxed income, or GILTI. In brief, the GILTI rules require a U.S person (individual, domestic corporation, partnership, trust, or estate) owning at least 10% of the value or voting rights of a foreign corporation controlled by U.S. shareholders (a CFC), to include its share of the CFC’s deemed GILTI income in its U.S. taxable income, regardless of whether any amount was received from the CFC.

Although “low-taxed” was in the GILTI acronym and the GILTI rules were meant to be an anti-abuse measure, the original regulations did not include an exception for income of a foreign corporation that was subject to a high rate of tax. Thus, whether a CFC was set up in the Cayman Islands in an attempt to avoid taxation of corporate profits or set up for legitimate business reasons in a country with a tax rate higher than the U.S., the foreign corporation was “guilty” and the GILTI rules applied.

Relief is now available for shareholders of a CFC if the CFC’s income is subject to a high rate of tax. If the requirements outlined in the final regulations are met, a U.S. shareholder (subject to certain restrictions) can elect to exclude their share of the CFC’s GILTI income. The election to apply the high-tax exception is made on an annual basis. The election can be made retroactively for taxable years beginning after December 31, 2017, and before July 23, 2020.

The rules can be quite complex. If the CFC is operating in more than one taxing jurisdiction or owns other entities, the income of the CFC may need to be divided into “tested units”. There are specific rules as to how to calculate the tax rate of a “tested unit,” what is considered a high rate of tax, and requirements and limitations regarding making an election. A full understanding of how the rules apply to a specific situation is important. The final regulations and related commentary are available here.

If you have any questions, please reach out to your personal Sciarabba Walker contact or email us at info@swcllp.com.